It is not a premonition, nor a desire, but a reality. “40” the new work of STRAY CATS is in stores. The first positive point is precisely that, to be able to relive the emotions and sensations of your adolescence, when you went to your record dealer and acquired the last work of your favourite band, something, without a doubt, very difficult to re-experience, given the intermittences of the trio as an active band and the current state of the record industry.

Another aspect that pleases me is that at this point STRAY CATS still surprises us, or in other words that, at this point, we do not know the idiosyncrasy of the band.

STRAY CATS has never been a rockabilly band to use and always, so to speak, they have done what they wanted.

We could experience it with his first work: a candy poisoned with echoes impossible to mix in a band of this style; ska, punk rock, jazz revolving around real rockabilly classic rockets. Logically, the most purist rock parish did not accept them. With “Gonna Ball” something similar happened, an approach to blues, which the press and media took advantage of to withdraw their support, however, this was the second lesson to get closer and meet STRAY CATS. With the third, they went down in history for recording a key and genuine rockabilly album. But more records arrived; “Rock Therapy”, a low-valued rock and roll Macedonia; “Blast Off”, another punch on the table in case we weren’t notified; “Let’s Go Faster”, a work that showed the most rock pop facet of the trio; “Choo Choo Hot Fish” that with its star theme gave another twist to its particular vision of understanding this genre. And now after 26 years we get a new album that, after having heard it, a word comes to mind…

ECLECTIC. That is the word. It can mean “Combination of elements of different styles, ideas or possibilities”

And this is what STRAY CATS have always done, since its beginnings, to combine, mix, merge, calibrate, something unusual, risky and with many limitations in a genre such as rockabilly, and that the vast majority, over time, we have accepted, savoured, valued and, of course, danced.

Why? Because Massapequa’s trio, first of all, are musicians and although your love of youth or your maturity partner is rockabilly, this does not mean that you cannot experiment with it and they have always done it.

Experimentation brings us a new detail, RISK, and new questions and answers:

What need do they have to release a new album? Why have they not settled for a new European tour? (like the one we are used to) Do they have anything to prove? Why haven’t they launched another Blast Off?

First of all, my answer is ARITHMETICS: because Setzer, Slim Jim and Rocker know that the name of STRAY CATS is bigger than the sum of their careers.

Second, because they enjoy. Who would say no to a meeting with their old colleagues? (Despite the conflicts of adolescence (Yes, they were 18 and 20 years old when they submitted the planet with their music in its first stage) but that happened, and, now, more than proving what they want is to show.

In third place, because there is an economic incentive, of course (how many times Slim has proposed to his teammates a lap … in addition the drummer talked too much in 2014 when he announced the recording of a new “ghost” job that is now has come true).

Fourth, because Setzer has proposed it, because, although it is a trio, there is always someone who has more weight and that is.

Fifth, because they are able to play their best trick and defend any of their albums on stage (as they have shown two months ago in the USA and in Europe). 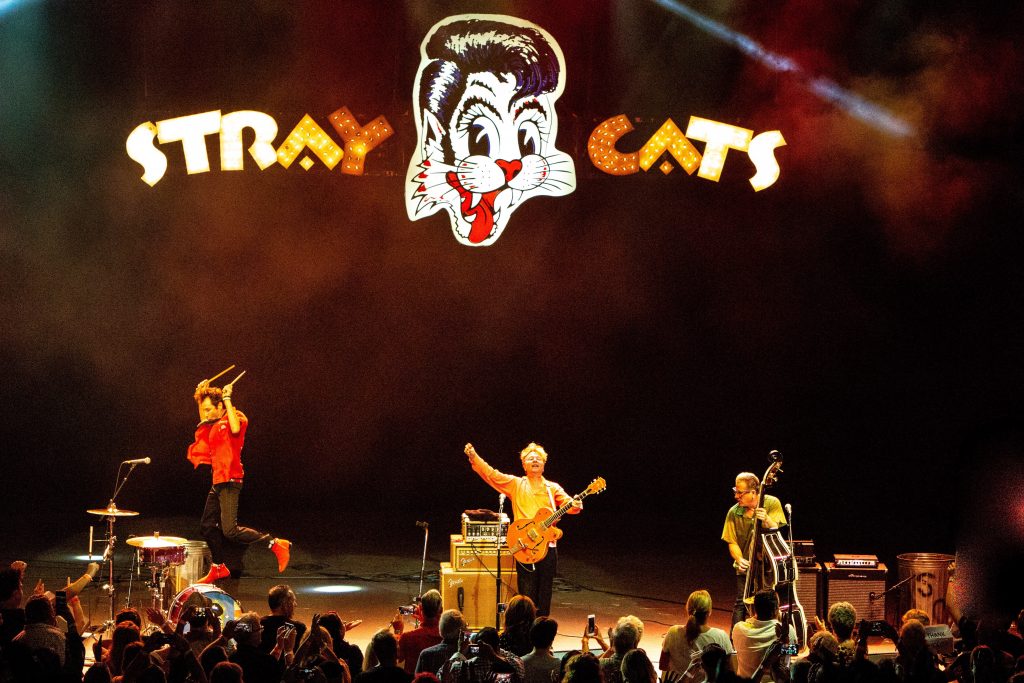 26 years ago, there were no social networks and connectivity was very limited, which is why “40” is the most analyzed and criticized album of all its predecessors. I was surprised by the dramatic response (close to self-flagellation or suicide), on the one hand, and positive, on the other hand, which has been seen on the networks in recent weeks.

This album should be tasted with perspective, for band and fans, with 60 years old and 26 years without recording and understanding the band’s record trajectory and the idiosyncrasy of which he spoke before.

That does not pretend to be a synonym for handicap, but I try to put the focus on the way in which the strength of STRAY CATS music comes to us now is different, also because of the maturity of the fans of course, (you just have to listen to the extra, more recent version, which appears in the “Double Talking Baby” and was part of their debut album in 1981).

The other response that I have perceived is positive and I liked reading a word and that defines very well, this work, WORTHY. Why wouldn’t it be? Have you not put resources, time and intention?

This album is also a kind of mosaic of his career, although Setzer has also taken the opportunity to pay tribute to himself, both for the decisions taken in hiring professionals, closer to his circle or career (lyrics and production) and for the “Setzer” sound that permeates some of the songs. It seems as if the other two had ignore it.

I was surprised (again) by the inclusion of a song like “I attract Trouble” that throws a new wave nod to its stage with The Bloodless Paraophs and the underground atmosphere of the late 1970s in NY; echoes of Richard Hell, Cramps and the entire clique of Max´s Kansas City 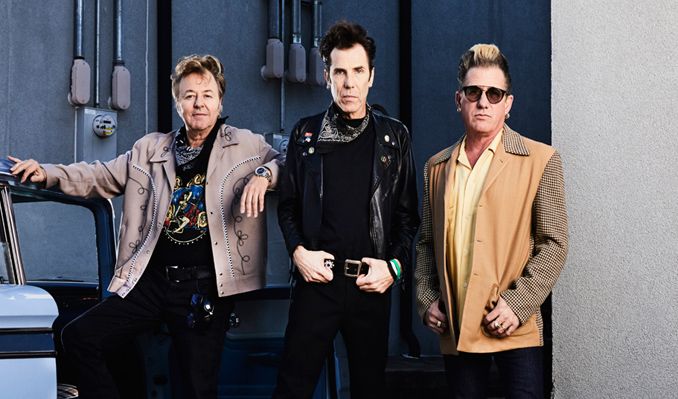 “I´ve got Love It you Want it” recalls “You re Humbugging” by Lefty Frizzell and it’s next to “That´s Messed Up” the closest thing to the rock blues of yesteryear that they have already recreated in other works.

In “I´ll Be Looking Out for You”, “Cry Danger” or in “When Nothing´s Going Right” (magnificent voice of Lee) we can find more echoes of “Let´s Go Faster”, his most rock album pop by far, or “Rock Therapy.”

In “Desperado” they have not wanted to deprive us of their usual instruments, but this time, they have transported us from the dance halls of the High School (“Sleepwalk”), or the jazz clubs (“Nine Lives”) to the heart of Almería, dressed up as Spaggethi western … something new, something eclectic …

But they also leave us peach rockabillies, such as the excellent “Mean Picki´n Mama”, the controversial and catchy (big choirs) “Rock It off” for its beginnings rescued from “My Way” by Cochran, “Cat Fight” or Setzerian rock and roll, “Three Time’s Charm”, inspired by Gene Vincent’s most swinging works, his other great reference.

Close the album, “Devil Train”, to get the juice to the rhythmic part of the trio, offering a powerful melody with devilish western rhythms. 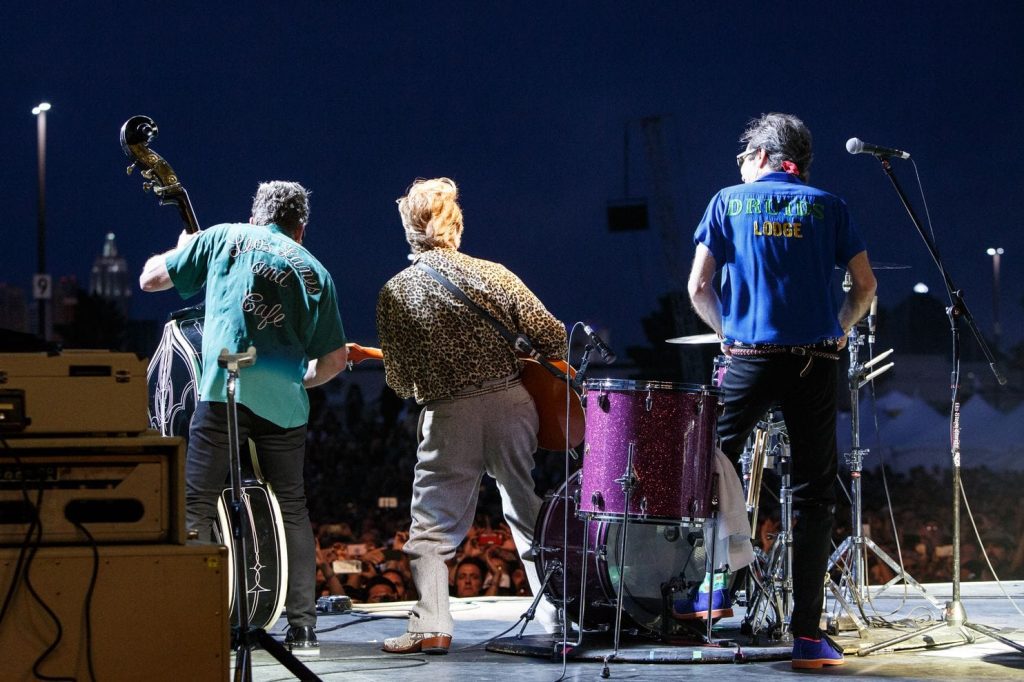 Some believe that Setzer’s solos could have been blunter or elaborate. He has declared that he did not want that grandiloquence that appeared in some of his works to be present, however, on this record I think that “containment” or simplicity has been more a virtue than a defect for the type of work that it is.

Others say that a production of Edmunds would have given added value, (a production of the Welshman will always give a lot of added value) but, on the other hand, Brian wanted to introduce a new nuance and wanted to record the album “live” although he did not want that sound of the 1950s, which gave him so many headaches in “Built For Speed”, he wanted something more modern, however, and although the sound is not bad, this premise does not play in favour, definitely, there is something strange, Slim Jim, on some issues, sounds more opaque and Rocker’s Slappin practically disappears and in other songs the instrument is heard low.

On the other hand, the choirs sound very good and are perfect for the proposed songs and, in that section, they have been able to take advantage of one of the strong points of the trio.

Others label it as “lazy” in the composition and that is that Mike Himelstein, the composer who signs, together with Brian, 6 of the 12 songs on the album, and who already did a good job in “Ignition”, simply, on request of the band, he has searched for new lyrics and not stick to hot rods and girls, as recently stated by Setzer. I do not think the weakness of this album is that. In addition, lazy would have been to play with the wild card of the versions, three or four covers of rockabilly classics to please the parish and finalized album, but no, it is the first album of the trio that does not include any version.

It is true that some of the first songs that were released, such as “Cry Danger” (also composed by Tom Petty’s guitar, Mike Campbell) were not very successful, from a strategic point of view, reaching the level of “replica” of a song from his first solo album, “Aztec”, but from there to not recognize their merits, nor respect the most influential rockabilly band on the planet there is a long way.

Nor is the design of the structure of the album well planned, as for the order of the songs, I think it is unbalanced, so it is possible that you like the B side more, although the principle of the A side is very promising. If some had changed order and / or replaced some, the result would have been better.

However, I like it, I think it’s a very interesting album and it’s always a pleasure to hear something new from cats and I think some live songs are explosives …

This is not his best album (it will be almost impossible to beat the debut album or “Rant ´n Rave”), but it produces a familiar feeling … you want more! And the more you listen to it, the more you like it … time will be the one that puts this new work in another perspective and valuation…

It has never, or almost never, been what we wanted or expected. The Cat pisses in the corners and marks its territory.

STRAY CATS are on their way and for me the most important conclusion of this new work is that, with a little luck, the three have taken the pleasure of being in a studio, again, and dare with more recordings in the future, then more than ever “40” would take on its meaning, becoming another step on a dance called STRAY CAT STRUT.

Ladies and gentlemen, with all of you once again, STRAY CATS. 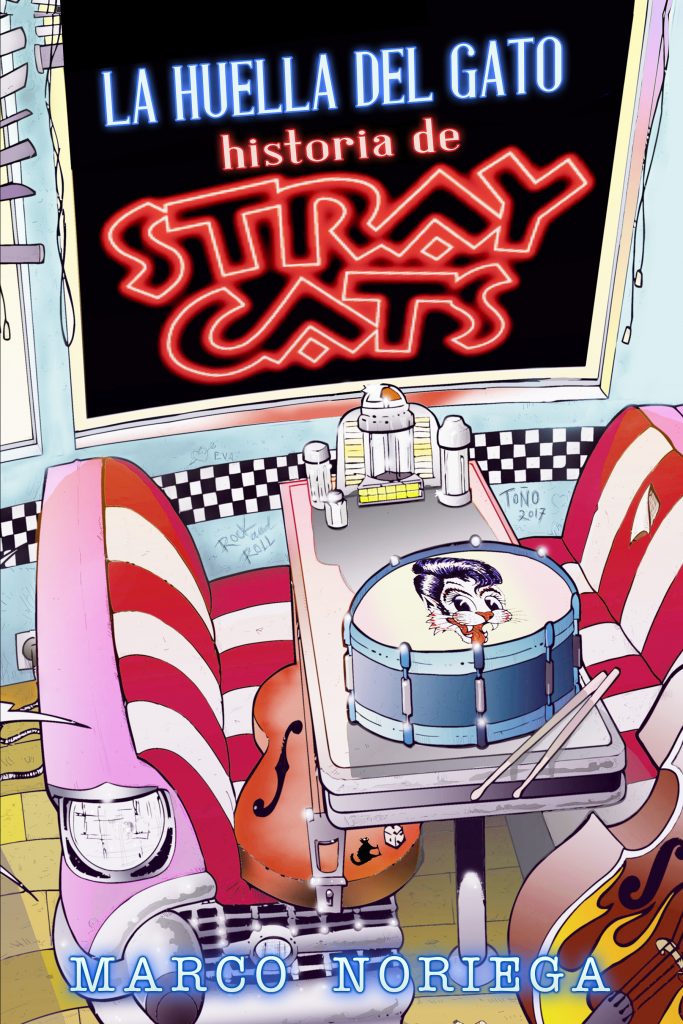 Next release in English version.